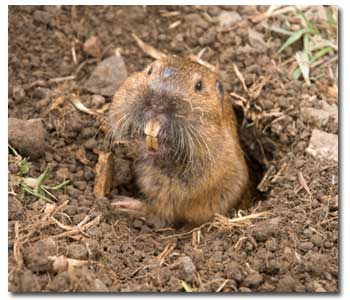 You might think gophers are cute and cuddly in cartoons, but they can be a real menace in gardens. Their holes and tunnels are sometimes confused with those of ground squirrels, but these furry creatures with strong digging claws and sharp teeth can cause a lot more damage to lawns and gardens than a squirrel.

Gophers will feed on many plants, both above and below the ground. They have particular fondness for vegetables, bulbs, and tender annual flowers. They also eat seeds, leaves, and tender stems, as well as invade lawns to eat grasses and dandelions. If really hungry, they may also feed on tree roots or gnaw bark from young trees in winter.

The gopher’s home is an extensive system of underground tunnels, which are excavated 4 to 18 inches below the ground. A series of these tunnels made by one gopher may extend several hundred feet and cover an acre of ground. Areas of gopher activity are marked on the surface by numerous mounds of excavated soil.

The characteristic fan-shaped mounds, which may be 18 to 24 inches in diameter and about 6 inches high, are at the ends of short lateral tunnels branching off the main runway. The surface opening, through which soil is pushed from the tunnel, is finally plugged by soil pushed into it from below, leaving a small circular depression on one side of the mound. Generally, the entire lateral is then filled to the main tunnel.

The placement of these mounds often gives a clue to the position of the main tunnel, which usually does not lie directly under any mound. One pocket gopher may make as many as 200 soil mounds per year. The most active mound building time is during the spring. And here’s the really bad news–gophers do not hibernate.

There are many home remedies to repel gophers, including planting gopher repellent plants or putting substances in gopher tunnels such as cat litter or rags soaked in pine oil. But they rarely produce the desired results.

But the most cost effective way to kill gophers quickly and in large numbers is with prepared poisoned bait, or the use of gopher traps. The baits usually contain grains such as corn, oat and wheat along with small pieces of fruit or dried vegetables. Simply drop the bait into the underground runways (beyond the hole) and then cover them with dirt to keep to keep out light and air. Make one application for every four to six fresh mounds. The same instructions apply for gopher traps.

It’s important to act quickly once you see signs of gopher activity, because once a tunnel system is in place, other gophers will quickly replace any you drive away.

Here is a bit of information from Chris Mizoguchi with Chris’s Ag Pest Control:

What attracts Gophers to your yard?