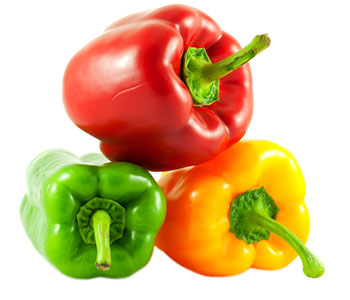 Peppers (Capsicum frutescens) are in the same group as the potato and tomato family (Solanaceae) which is also called Nightshade. The pepper is another one of our favorite vegetables that are natives of South America. It has been a part of the human diet in the Americas for thousands of years.

Peppers are considered a warm season vegetable. There are many varieties of peppers ranging from sweet to hot. One of the oldest and popular garden varieties is the sweet, thick-walled bell pepper ‘California Wonder’. Peppers take 70-90 days to mature. In the colder climates, peppers should be started from seeds two months before planting in the garden.

A bushy annual, the plant grows to from 1-4 feet tall and likes full sun but will tolerate part shade too. Regular water is necessary, along with a long, warm growing season to produce the most fruit. If your growing season is cool or short, try techniques that will increase the warmth around your plants such as clear plastic mulch.

Peppers require temperatures of 78-80 degrees and can take 3 weeks to germinate. Before setting plants in the garden they need to be “hardened off“. This is done by setting the plants outdoors in a protected area when daytime temperatures are in the 60′s and bringing them inside at night. Gradually increase exposure each day for a week or more. Avoid direct sun and too much wind.

Transplants should be planted at the same depth as grown in their container- too deep can suffocate the roots. Don’t plant peppers where you previously grew tomatoes, potatoes and eggplant. They all belong in the same Solanaceous family and are susceptible to the same soil borne diseases.

If night temperatures drop below 55 degrees or lower, peppers will grow very slowly, foliage will turn yellow and the flowers (if any) will drop off.

Peppers prefer a well-drained, rich loamy soil. Use a starter fertilizer such as Dr. Earth® Starter Fertilizer when transplanting and provide 1 inch of water per week throughout the growing season. You may choose to mix in Kellogg® Amend which as a starter fertilizer mixed in. Uniform moisture is essential. Overhead watering is not recommended especially when the plants are in bloom as it will wash away the pollen and eliminate fruiting. Be careful not to apply too much fertilizer as adding too much nitrogen will give you a large leafy plant and no fruit.

Once a crop of peppers is set, use an organic fertilizer with a low nitrogen ratio.
There are so many kinds of peppers – what is your fancy? They range from the classic bell peppers that can be green, red, yellow, orange or buff to Hot Hot Hot!

Hotness scales related to peppers reveal the amount of capsaicin, which is the source of that hotness, and truly can be scientifically measured. Bell peppers are rated at 0 SHU (SHU=measure of hotness), green chilies are 1500 SHU, jalapeños 3000-6000SHU and habaneros 300000 SHU. How could one even chew one tidbit of something that hot!! Great care must be taken when trying out a new, hot chile pepper.