It sounds cute, but foxtails wreak havoc on our yards and pets 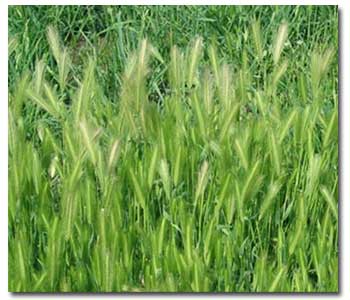 jump to controlling foxtails in the landscape

A foxtail is a spikelet or spikelet cluster of a grass which disperses its seeds as a unit. Grasses which produce these spilelets are called “foxtail” also “spear grass”. The name foxtail is used for a number of grasses that have bushy spikes of spikelets that resemble the tail of a fox.

Foxtails germinate and grow much like crabgrass. Foxtails are common in weedy areas around roads, paths, open fields & hillsides, orchards, vineyards, landscaped areas; just about anywhere in our warmer climate. Foxails are summer annual grasses and is soft and green from January through April. As the seed heads dry in late spring, they become dangerous and stay that way throughout summer and early fall. The “seed head” breaks apart and the barbs easily adhere to animals, clothes or almost anything that brushes up against them.

Dangers to your pets

When clinging to animal fur, the movements of the animal can cause the foxtail to burrow into the fur. These foxtails have barbs which only allow them to move in one direction, making it very easy to get lodged into an animals fur, and eventually skin. The foxtail can cause much damage to animals as it enters into the soft tissues and organs, causing infection and sometimes death.

Check your pets regularly for foxtails if they go outside. Brushing the fur of your pet with a comb will allow you to see and remove any foxtails before they become lodged in the skin. Long haired pets may need a little extra attention when checking for foxtails. If your pet is limping; this can be an indication that something is stuck in the foot, a common area for foxtails. Foxtails are also commonly found in the eyes of animals and often lodge themselves under the eyelid. These can be hard to see and a trip to the vet may be required. 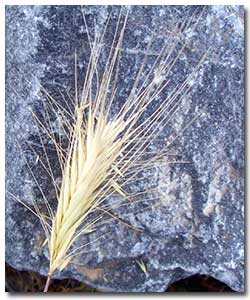 Controlling foxtails in your landscape

So how do you control this weed? It seems like they are everywhere! While you’re probably not going to be able to stop your cat form running in nearby fields, which are usually over flowing with foxtails; you can control them in your own landscape. Here are some suggestions: